I wanted to do something in WebGL (which is much simpler than I thought) and I ended up writing this. I made an effort to make this article readable on any browser, but it's much better with WebGL enabled, so I strongly recommend turning it on.

Knowing how this works is not required to enjoy the animations, so feel free to skip the math sections if they do not interest you (or if you already know all this).

WebGL did not work :(

It seems that WebGL didn't start. You can visit get.webgl.org to find out how to enable WebGL on your browser. You can also try another browser or maybe even your mobile phone. Or you can keep on reading — I've added some YouTube embeds and images for this case.

Newton's method is an algorithm for finding roots (also called zeroes) of a function — inputs for which the function becomes zero. In other words, solving

There are many functions that don't have analytic expressions like the one above for finding their roots. In these cases we can use a root-finding algorithm. Newton's method is such an algorithm for differentiable functions (which is most functions that you will normally encounter).

It starts with a guess z0 and then iterates the following expression until the values either converge or fail to converge.

We will be working in complex numbers, which naturally lend themselves to 2D images. Compared to regular (real) numbers, complex numbers are pairs of numbers. A complex number z = x + y·i can be represented as a point on a 2D plane with coordinates x and y, or alternatively as a pair (x, y).

Let's find the roots of f(z) = z3 + 1 with Newton's method — the general solution to cubic functions is a tad unwieldy. The derivative of f is f′(z) = 3z2. Our iteration becomes 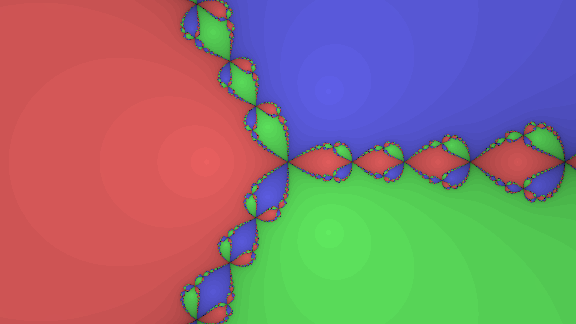 In our example, we saw that depending on the initial choice of z0, we can end up with different roots. The set of all initial values that give us a given root is called that root's basin of attraction. 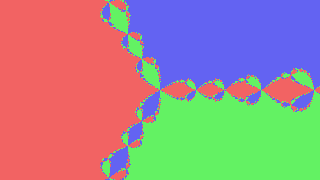 Basins of attraction for z3 + 1 colored red, blue and green (without shading).

We also saw that some guesses are better than others. z0 = 1 took 9 steps, while z0 = 1i was faster and only took 6 steps. We can use this to shade our image by the number of steps taken. Better initial guesses will be lighter and guesses that take a long time to converge will be dark.

This kind of visualization is called a Newton fractal.

An equation can have any number of roots. If we want to color each basin of attraction differently, we need to choose the colors algorithmically. This problem maps neatly onto the HSV color model. We choose a hue that corresponds to the root angle (the argument, or phase).

We set the color value (the V in HSV) based on the number of steps taken. This makes good starting points lighter and darkens those that converge slower.

One problem remains — what if two different roots have the same angle? That is, what if they lie on the same line starting at the origin? One such example is (z-1)·(z-2)·(z-3). To differentiate these, we set the saturation so that the closer the root is to 0, the more saturated it becomes. 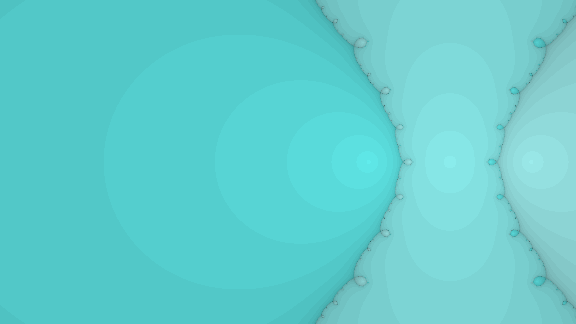 Choosing HSV in the fragment shader

Generating these graphs is somewhat computationally intensive. Every pixel needs to perform a separate Newton iteration, the input functions can be complicated and they operate on complex numbers — pairs of floats, rather than floats themselves. Even something as simple as multiplication of two complex numbers takes a few operations.

Generating them in real-time, with a high resolution and frame rate in a high level language on the CPU is a nonstarter. Fortunately this problem lends itself really well to parallelization. And with today's powerful GPUs and increasing WebGL support, we can run the iteration in parallel in a browser. Breaking it down into steps, the process goes like this.

Working with the equation

Newton's method requires us to compute the derivative of the function we want to solve. First we parse the equation into an abstract syntax tree (AST) using the nearley library. 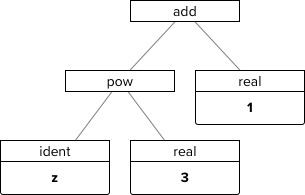 An AST will allow us to perform transformations on the equation, the first of which is to symbolically compute the derivative using differentiation rules.

Because the results of automatic differentiation can contain some unnecessary junk (such as multiplying a number by 1), we simplify the derivative AST by applying some common identities (such as 0 + z = z and 0 · z = 0) and we simplify some operations (replace 1 + 2 with 3). This helps with the frame rate, especially on slower machines. In our example, the differentiation yields 1·3·z3-1 + 0, which simplifies to just 3·z2.

Finally we convert the ASTs of both the original function and its derivative to GLSL, which is the C-based language shaders are written in. To put it simply, shaders are GPU programs. The bulk of our code is a fragment shader, which puts out a color for each pixel independently (and in parallel).

Making it all interactive

We now have a way of rendering static Newton fractals relatively fast. We can take it a step further and animate it all. We'll introduce two parameters — real t for time and complex m for mouse coordinates. We declare the parameters as uniforms, which are shader input constants that stay the same across all pixels.

Uniforms declared in the fragment shader.

Every frame, we update the uniform values (without recompiling the shaders). 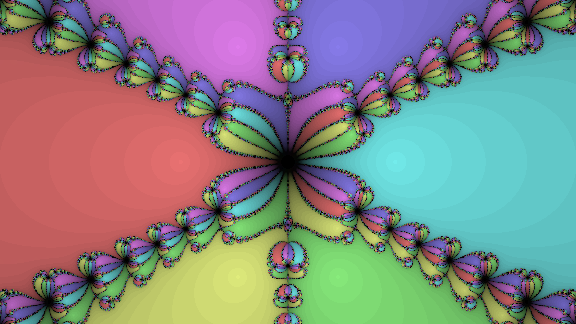 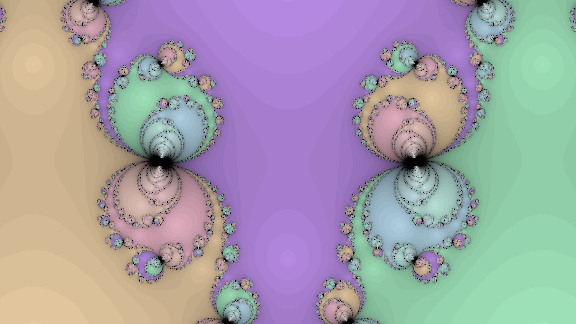 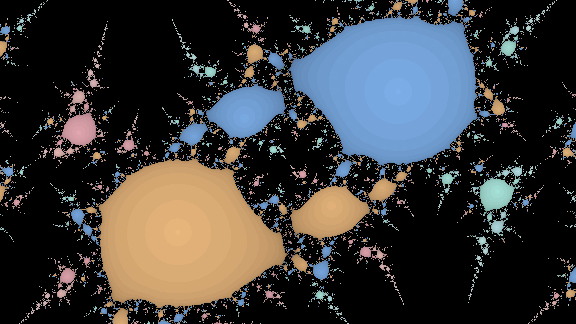 Remember how complex numbers correspond to points on a plane? So do mouse positions! We set m to precisely the complex number pointed at by the cursor. This lets us get a better feel for the function, e.g. cos(z) + m. This works with touches on mobile devices too by the way.

We can use z2m + 1 to study how our earlier example z3 + 1 behaves as we change the exponent to fractional, negative and imaginary values. 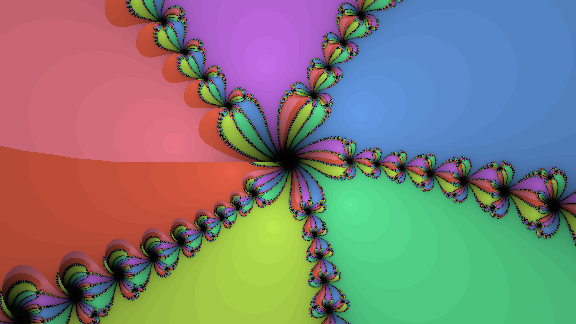 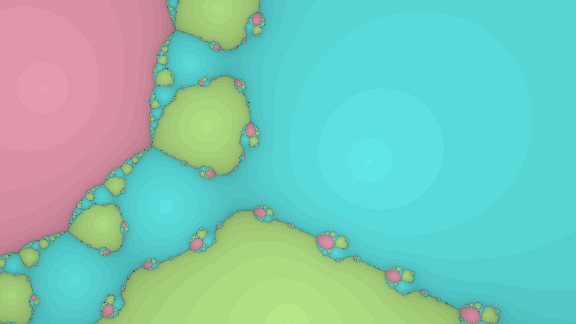 You can peek at the values for these parameters in real time by using the advanced tab.

Recent iPhones have a feature called 3D Touch, which measures how much force you're applying while touching the display, which I thought would be fun to add to the mix. We represent touch force by a real parameter f that runs from 0.0 to 1.0.

Another one of these is Householder's method, which also requires a second derivative. It's interesting to compare graphs generated with these to those generated with Newton's method — the differences as well as the similarities.

You can restart the rolling demo to see the difference on a variety of functions.

A note on accuracy

Different WebGL implementations may produce slightly different results and sometimes glitches might show up. Also, there might be some bugs in the shader code, especially the more exotic complex functions — web GLSL isn't exactly easy to test.

Writing your own functions

You can write your own equations. One way to get started is by playing with existing functions — change the constants, add things, multiply by things, wrap things with functions, change functions to other functions, and so on. Let me know if you find anything interesting!